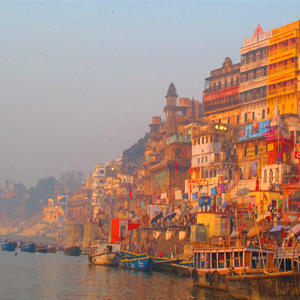 Often known as City of Taj Mahal, City of Love, and City of Forts, the heritage city Agra has been the consistent witness of changes which took place in medieval India. Right from sultanate reign to splendid mughal empire, Agra has seen the world changing its courses. The vast mughal empire from 1526 to 1857 left behind a course of history in Agra in which thousands of stories are still unheard. The majestic mughal culture has been evolved from the fusion of two fierce warriors of Central Asia, Taimur Lang and Changez Khan and its reflection can be seen in all over the Agra in its forts, palaces, parks, gardens and even in cuisine. The seventh wonder of modern world Taj Mahal is in Agra and is also in the list of UNESCO’s World Heritage Site. Agra is approximately 600 kms away from Varanasi and it takes nearly 10 and half hours to reach there via NH2. Bharat Taxi provides one way and round trip for to and fro journey from Varanasi to Agra. Getting car rentals in Varanasi is affordable and best with Bharat Taxi. You can get best deals on car rent from Varanasi to Agra as well as get car rental fare details from Varanasi to Agra. Car rental services Varanasi to Agra are available for all cab types, Economy, AC Car, Non AC car, sedan class cars, SUVs. Affordable airport car rental services are also arranged by Bharat Taxi. Affordable and best Airport pick and drop from Varanasi to Allahabad, Airport transfer services from Varanasi airport to Allahabad airport are available with Bharat Taxi. Choose from a wide range of options on Varanasi to Agra car rental such as Varanasi-Agra sightseeing and Varanasi Agra full day car booking. You can book economy, budget and luxury cars online, get offers and discounts. Bharat Taxi provides best and affordable car rental services from Varanasi to Agra for outstation, one way and round trip.